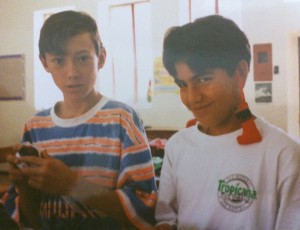 Midway through highschool we caught whiff of rumours in the wind of another 2 boys joining the school after the summer break. They were coming down from hellish Florida to idyllic Cochabamba to stay with their relatives and live the opulent lifestyle afforded to them by their DNA. This was exciting. For everyone, but mostly for the girls since our grade was so small it gave them something to swoon over other than Chris, Fat Javier and myself, and let’s face it, I only had so much time available in my day. So Luis and his younger brother arrived with much pomp and circumstance. The Floridians, much like the oranges of the region, were sunkissed and juicy and all the girls wanted a slice. Jenny may have fainted that first day claiming her bodice was too tight. Aside from being an altogether amazing pair, unfortunately Luis was also rather… Lilliputian. So I called him Pitufo (Smurf) for the first few months. Eventually we became close enough friends that we decided I wouldn’t tease his height anymore. Also helping his case was his intimate knowledge of karate and the fact that he threw me into the ground one day with enough force to dislocate my ovaries. He may have been taught by the uncle he lived with, who had reputedly killed a raging bull with his only his bare hands and martial arts skills at one point. Years later Luis’ brother Eddie tried to teach me Karate throws but to no avail; sadly my caring, gracious heart meant I was completely useless at all things combative  …also, being built like Kate Moss didn’t help. One of my first memories of Luis was climbing over the gate for him so we could get into his house as no one was answering the intercom. He asked me to do it because I was nimble and lithe obviously. Like a leopard. Not like a gecko with an autoimmune disease. Anyway, we got busted cold by his uncle but thankfully I never got a lecture and just sat awkwardly in the maids’ quarters getting filthy looks while everyone yelled at each other upstairs about the virtues of waiting for someone to respond to the bell.

Luis was also fiercely competitive which I’m ashamed to say we used to our mirthful advantage. At sleepovers at Chris’ house, Chris would pretend the TV was too heavy to carry just so Luis would lug it out to his room for him so we could stay out there all night playing Luis’ Super Nintendo. He would lend it to me while he returned stateside for summer break, mostly because he didn’t want his annoying cousin Diego playing with it in his absence. I was happy to help out and consequently turned into a pale gelatinous blob with square eyes, erasing my thumbprints with those old school plastic button controllers. Since i lived at the school, one day he told me he could finish the entire Mario Bros game in half an hour which turned out to be overstating it a little. We missed most of science that day and got lectures from Miss Christian about time/space theory and how it meant if our butts weren’t on stools at precisely 12:30 the universe might explode. She sure did.

On a trip to Santa Cruz once, Jeremy and I were failing miserably at keeping a ball in the air after bouncing if off the wall. We’d kick it a few times, maybe 4 or 5 tops, before losing it, but we told captain competitive we were up to 37 and he spent the rest of the day trying to beat it. Sorry Luis. Eddie & Luis would also come over to shoot with our air rifles. Mine was some obscure Brazillian piece of death machinery that required you snap the barrel down to load the pellet and pump the air cylinder. It could kill a rhino from a mile away. Eddie got the webbing between his thumb and forefinger jammed in there once and it bled like he’d hit his femoral artery. I was cleaning blood off the bathroom ceiling for ages. After a while I got sick of it and just painted over the rest and told mum it was from a bad bout of choleric spouting, which is a much more plausible story and would involve less groundings.

Everyone liked Luis, but he always had a problem with teachers. More often than not, our history teacher Miss King. During lunch one afternoon he found a couple of baby frogs and left them in her drawers. Her desk drawers I mean. That could have been awkward. Moving on. We returned to 4th period history awaiting screams and passing out but got nothing. She was never terrified by the frogs. By the time she found them 4 months later they were mummified and reasonably skeletal and she laughed and threw them in the bin, assuming they’d just crawled into her desk. Or perhaps cackling, she ate them. It gets fuzzy. This temporary failure just spurned Luis on to loftier goals because on our prom trip years later Luis locked her in the bathroom and finally got the screams he was looking for. Then she got the screams she was looking for, because Miss King apparently could be rather strong when she wanted to be and broke the door down to come after us. She said she ‘knew‘ it was us boys, even though we were watching a movie, same as the girls were. But let’s be honest, in a class of 8, heavily weighed down with girls, (mathematically I mean, most of them were quite athletic) our genetic predisposition to acting up meant it wouldn’t really take a Sherlock Holmes to nab the perpetrators. I don’t think we ever got in any kind of trouble, since he wasn’t admitting anything and there was no proof. Still, karate or not, I think she could have taken him.