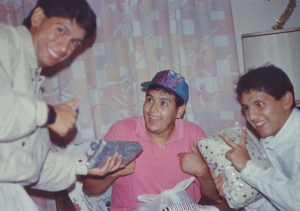 I’ll be brutally honest: church in Bolivia was never any fun at all. Mum & Dad tried a few different churches over the years with ever loftier heights of boredom and awkwardness. Making things more difficult, in the beginning we weren’t speaking Spanish, like everyone else. Also, we weren’t dark-skinned and attractive, like everyone else.Â Even when we learnt Spanish, which helped our survival somewhat, since it made buying food a little easier, by then everyone was speaking Quechua, and there was no way I was going to that much trouble. Â Mum wouldn’t let us take entertainment along to services either, lest we, completely by accident, happened to ‘make friends’ and destroy our glorious solitude, the only means by which any us 3 might develop any character. Obviously our generous bounty of sticks and the painted rock we got for Christmas would make the other kids jealous hence they were left at home. So the three whitest kids in the country just sat there each week for 3 hours, glowing brilliantly in the 3rd row, unsuccessful in our inconspicuousness and wholly bored out of our brains, trying to avoid drooling on the pew while we slept, but each other instead. Years later things improved somewhat, when we attended a church held in an apartment, pastored by the father of 2 amusing fellows: Thomas & Daniel. Like the rest of their family, Thomas & Daniel spoke English (they had spent some time in California in the days of their youth) and were neither dark-skinned nor attractive, so we formed an immediate bond of empathy. Thomas was a graphic designer and I have no idea what Daniel ever did other than flirt with the ladies. The apartment church had rows of seats in the living room (obviously the 1st rule of churching is the necessity of rows) and Thomas and their sister Gladys would provoke us musically from the front of the room. He played guitar and she played the keyboard and some other guy whose name I’ve forgotten would attempt to sing but just stared at Gladys the whole time and now they’re married and have about a zillion kids. Apparently the 3 of them of them were in some kind of Partridge Family-esque band bringing joy to people across the country, but any evidence of this legend on a sunday morning was always oddly absent. We had communion once a month, which Thomas & Daniel really loved. They were always in a great mood afterwards. Less a symptom of spiritual steadfastness and piety, I discovered this was mainly because we used wine for communion. I busted the two of them in the kitchen after church, polishing off the leftovers and sliding off the bench-top, in a state of confusion concerning the whereabouts of their pants. And their dignity. But you know Pastor’s kids. To say they’re worse than Missionary Kids is like saying the American health system is worse than Yemen’s. Don’t fix it though. That’s the first step in that downward spiral to communism. Everyone knows Russia, Cuba and North Korea all have fantastic health care. Thomas & Daniel were both very social chaps, and would invite me, for instance, to play volleyball in their courtyard, or to pirate loads of their software, or to eat raw fish for lunch. Yes, they’ll TELL you it’s cooked, but everyone knows sevichÃ© is just plain ol’ raw fish. For the un-initiated, SevichÃ© is fish fillets soaked in lemon juice. The citric acid ‘cooks’ the fish and makes it healthy, nutritious, and more importantly, almost vaguely edible. If you like acid-flavoured fish. I don’t remember if it was tasty or not. I think not. I stuffed most of it in my socks and wore it home like some old lady suffering from cankles. A herd of cats attacked me long before I reached the house. Nonetheless, it was nice of the brothers to invite me. The best trip they took me along to was when one of them (let’s go with Daniel) was translating for an American Missions team who were spending the weekend down in the lush tropical jungle region of the ChaparÃ©. This was a good thing because A) these teams always had 1 or 2 hot girls on them (law of averages) and B) I’d always loved the ChaparÃ© and its lushy tropically goodness. Â Turns out, we were only taking the bus down with the above average-looking team of americans and promptly got off at the first town, leaving Daniel with the spoils. I felt as though I was stuck holding the smelly end of the proverbial stick. I wasÂ trapped in a hot tent all night with Thomas who had decided to get frisky on the bus and begin stroking the back of my neck from the darkness of the rear seat. Â It still freaks me out when random people on the bus do it, but I’m learning to cope. I must have an attractive neck. Regardless of some personal space issues and the mosquito autobahn buzzing through holes in our tent door, I managed to sleep ok from around 5am, and at sunrise Thomas’ Dad (who at various times throughout his life looked a lot like Elvis) taught us how to fish in Bolivian streams. I didn’t take part as I was too busy scratching my red, useless, and now extremely porous, epidermis off. Thomas laughed at me the whole time. Daniel, absent for the weekend and feeding young American women grapes by the poolside, was probably laughing at me too. Still, I enjoyed the trip and miss the rapport those two had. All these years later, Thomas now lives in Canada with his family and Daniel, also married, chose to migrate to Britain. No one is sure why. Perhaps all the communion services.