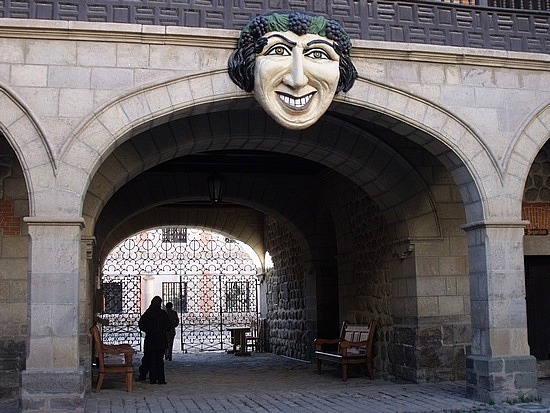 I realise I’ve let the team down somewhat, in that I haven’t covered in detail much of Bolivia’s other cities and locales of interest. Obviously, I won’t start today, but at least a couple will get a mention. A few years in, on yet another one of Dad’s character-building exercises, we endured a family trip to Sucre and Potosí. Two Cities you’ve probably never heard of, and will never hear of again. Sucre is Bolivia’s constitutional capital, but no one cares and everyone just asumes La Paz gets the honour, since Sucre is in the middle of nowhere and has a population of about 3 and a half. Potosí was once called “The Paris of South America,” presumably because it was full of snotty Europeans and no one wanted to go there. Or perhaps because it had more silver than Queen Elizabeth’s kitchen drawers. Seriously, history states that Potosí had MASSIVE silver reserves that made Bolivia the prosperous, rich nation it is today. Or, alternatively, the land was pillaged and all the silver got shipped to Spain and Bolivia was left with nothing. You pick. I remember nothing of Sucre whatsoever from that trip, other than we were staying at a satellite school there. Sucre houses some amazing historical and cultural artifacts and has had 3 other names over it’s turbulent history. The House of Freedom holds the country’s constitution and despite rumours to the contrary, is sadly not Superman’s summer getaway. One of the cathedrals, if memory serves, actually has a whole room gilded in gold, which can be picked clean if you’re patient and happened to bring a nail file with you. All this amounts to =boring though when you’re 12. But I could have lived in Sucre for the rest of my days, because those American kids at the satellite school had the biggest pile of Lego™ I’d ever seen in my life. They weren’t even playing with it any more, so it pretty much covered the entire floor of their room like the world’s most painful carpet. Mostly they just used it to construct things around the home, like a doghouse, or a spare Jeep Cherokee. Their collection was a good deal better than the 3 red bricks and a tire-free wheel that had been handed down to me from other dead MKs. If I imagined real hard and squinted, I could make a mean windmill. In a scene reminiscent of the Great Escape, I managed to carry about 5 handfuls out of their house in my underwear, making for an uncomfortable walk home which left little Lego™ dimples imprinted all over my privates.

Bookended by the stay in Sucre was the main purpose of our trip: a hideous, gut-wrenching bus ride to Potosi, in which the ride itself felt longer than the actual visit to the city. The highlight of the arduous 18-hour bus trip was an old copy of the  Magnificent Seven, played on the bus’ Magnificent 7-inch TV in Magnificent Black & White with Magnificent unintelligible Spanish Dubbing. They spared us another terrible movie on the trip back and thankfully just played that one all over again. One highlight was losing the entire contents of my stomach out the window at one point. When we stopped for a lunch break, the driver got a highlight of his own: cleaning 2 litres of acidic carrot off the side of his bus with his handkerchief. Thankfully for him, since the road was so dusty, the whole thing just looked like a dried mud smear. Perhaps he was none the wiser as he jammed his now bloated, juicy cloth back into his pocket. Arriving in Potosí about 7 hours later and 5 kilos lighter, we jumped off the bus and ran straight into a welcoming café, where we promptly collapsed from altitude sickness. Potosí sits at 4000 Mitres or 13,000 Feet, (compared to Cochabamba’s 2,500m/8,500ft) which is pretty high by everyone’s standards save for Neil Armstrong and the other guy that had a cameo in Transformers 3. Potosí used to house Bolivia’s main coin mint, which was apparently a highlight, but I was actually really excited about visiting Potosí because of all the mines. Well, not really the mines, but the Dynamite that was readily-available on pretty-much every street corner of the city.  Friends from school had been able to purchase some in the past, and I was looking forward to some terrorist activity. There were still plenty of active mines around, but none of them were safe at all and you’d be insane to visit them. I now claim ownership of a father-in-law who’s a coal miner. He has equipment that can pick up a fart in a mine shaft. (Seriously.) My own fart-detecting equipment has always worked pretty well too, much to my detriment. Of course, despite my dreams of destruction,I wasn’t allowed to buy any dynamite, because I had terrible parents; and was given instead some chocolate bars to placate me for the bus trip home, which had explosive consequences of their own. And that’s about all I remember from the trip until we got back on the bus some hours later and returned home. Looking back, I’ll concede Dad’s wisdom at the time that perhaps dynamite wasn’t the best choice of souvenir for the world’s bumpiest 8-hour bus trip.  We did visit the famous Potosí mint, but I was so delirious from the altitude and dehydrated from my up-chucking that I remember hardly any of it. They did have some very old coins there. Back in the 70’s inflation got so bad you needed a wheelbarrow just to cart your weekly pay home, which is a great story if you want to impress naive friends. We returned to Sucre in the middle of the night, sans-explosives and exhausted. I deposited in the toilet the lego brick that had lodged itself in my insides during my afore-mentioned heist, and hit the pillow hard.

Note: Just checked Google maps and apparently the trip from Sucre to Potosi only take 2 hours. Yeah right. In the Space Shuttle maybe.