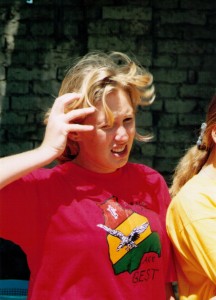 Ah… where to start with Abi? The beginning I suppose. That’s a good place to start things. Let me take you back through the murky mists of time to Grade 5…

I know this will be hard for most of you to believe, but when we first arrived in Bolivia I was pretty dorky and not much of ‘the cool’ at all. I wore shorts made for my sister and fluffy socks and a hat that had a back on it to protect your neck from the sun but really did nothing more than protect adjacent seats from people that might have contemplated sitting next to you. So I was a bit of a loser. I met Joel in the playground the first week there and destiny decided our families would dine together that night. His sister, Abi, was in my class at school, although I hadn’t spoken to her yet since she was a girl and might have had cooties or rabies or something for all I knew. After dinner us kids had a fantastic time throwing stuffed toys at each other over the divider in Cory and Joel’s shared room. We honestly all had a great time. I had friends. I was accepted. One day I’d have shoes with laces instead of velcro. Things were going great. I saw Abi the next morning at school walking past with all her popular girlfriends. “Wasn’t last night AWESOME?” I said, eyes-wide and eager for social standing above perhaps a cross-eyed gopher or that dutch kid who picked his nose with his middle toe. Stonefaced, Abi replied “No” and kept walking. There’s been some pretty crushing moments in history, but they pale in comparison to that shoot-down. I was destroyed. I heard a little ‘pop’ inside as my heart broke and spewed blood all over my lungs. They found me in the showers, chewing on soap and rocking back and forth singing “sticks & stones.”

So even though once I finished school I had more shared time with Abi than anyone else over the years, we didn’t really get along in the beginning. I used this to my advantage ’cause I was a massive brat and enjoyed causing trouble. I saw Abi’s Christmas present arrive one year (a racing bike atop a VW Beetle. Beetle not included.) and started dropping hints about it until she ran home and dobbed and I got a lecture from Judy about not ruining Christmas, like I was Salmonella or drunk uncle Joe or something. One afternoon Abi came over and watched Anne of Green Gables with me for perhaps the 5 most awkward hours of my life. What the heck was I doing watching that crap to begin with?! Another time we made brownies but we put too much salt in so they tasted like we were eating armpits. Over the many summers of Joel, Abi would hang with us until her friend Darlene came over and then she was too cool and wanted nothing to do with us. That was fine by me. She sucked at building forts and we always had to construct separate lavatory facilities for her which she never used anyway. We both enjoyed track events and won in our age categories each year, but our mutual fear kept us from ever racing against each other. I would have won of course. The High School years were much better. I’d matured to the mental age of 11 and since we were the only normal ANZAC kids we had a bit of a bond going.  Abi & I had a pillow fight in the gym once with those big old heavy pillows they used to fill with sand or duck down or something. We were both exhausted from smacking each other around the head and I was in the process of collapsing to hopefully die peacefully somewhere, when Chris, who was in the crowd, got an evil glimmer in his eye and yelled “one more! hit her one more time!”

See, he’d noticed the pillow begin to tear at the bottom and was hoping for wanton destruction and violence. I was oblivious, but I flung the pillow as hard as I could across Abi’s face and feathers went EVERYWHERE. And I mean everywhere. I was finding plumage in the toilet 6 weeks later. My kids will be born with down in their hair. I inhaled an entire goose. That thing exploded like someone shot Daffy with a bazooka. If ducks had gone to Vietnam that’s what it would have looked like. I walked around wheezing and blowing feathers for about an hour afterwards. In Grade 11, Abi got her driver’s license a while before I did, so she drove us all over the place in Magnum PI’s Beetle while the Ferrari was in the shop. Because she was blonde we’d get randomly pulled over by the cops who just wanted a quick look. Thankfully they were all turned off by Joel and I in the car, our muscular frames bursting out of the tiny vehicle, popping windows out of their rubber frames. Once I got my license, I would drive the girl’s around, and because we had a sunroof (Dad, look away now) they could stand up in the back of the car and wave at people walking past. Once I got back in the car after delivering something and discovered Abi had pressed just about every button she could find.  The stereo, indicators and wipers all went nuts. I thought it was about to explode. Sidenote: When Dad bought the car he asked the salesman how many miles were on it. “How many do you want on it?” he replied helpfully. Awesome.

So I guess to sum it all up, Abi’s probably been one of the few constant things in my life, aside from the athlete’s foot and that midget who whistles at me through the window at night while I sleep. I try to visit her and her family in New Zealand every couple of years or so, when they let me. There was never any romantic interest between either of us, if you’re wondering. Mostly because I was too skinny and my initials aren’t J.W.

It’s Abi’s birthday tomorrow, and by the time she reads this, she will have given birth to her 3rd child. She’s a fantastic mum and one of my most cherished friends. Happy Birthday!