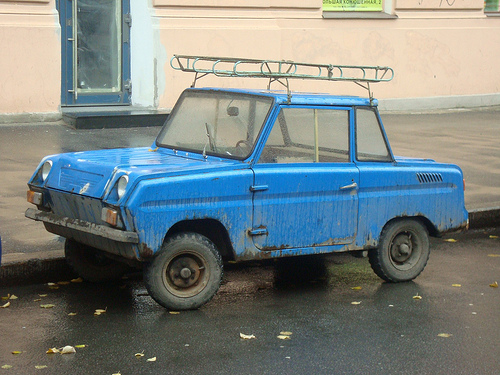 Like the rest of you, I learned to drive with an insane Bolivian Taxi Driver on cobblestone streets on the side of a mountain. Right? Anyone?

In my high school years, since my father was the principal and could pretty much do whatever he wanted, he started an electives course so I could get my driver’s license. That way, I could learn to drive as part of the curriculum, without having the wrest his personal car keys from his iron grip. The downside was he also had to invent a bunch of other electives for everyone else, like ‘guitar’ or ‘photography;’ skills that no one would ever use ever, outside trying to attract members of the opposite sex on park benches. Obviously acquiring a driver’s license in Bolivia was a somewhat superfluous exercise, but was cheaper in the long run than paying the cops each time you got pulled over for being pale. My driving school was called “Indianapolis,” so named because the instructors drove like they’d done a few Indy 500’s in their time. It’s more likely they were just Bolivian taxi drivers, born with the innate skills required to survive on Bolivian roads past the age of 16. I’m sure Indianapolis provided about 0.005% of Cochabambinos with the driving skills required to survive on the city’s streets. Half of my lessons were cancelled (without my prior knowledge or consent) as they’d take the day off to help out some old taxi buddy. On the days he was present for tuition however, Carlos (probably his actual name) was a more than capable teacher. I learnt hill starts on a cobblestone lane that was so steep, several goats glanced up nonchalantly  when I got to 2nd gear. We passed a guy with an oxygen mask and an ice pick clambering along, mumbling something in German. The little Suzuki Vitara put up a brave fight, all 3 and a half cylinders doing what they were supposed to. Other lessons included Avoiding Traffic Cones, Avoiding Pedestrians, Avoiding Cows, Avoiding Ditches & Roadblocks, and Avoiding Armed Insurgents, which was quickly followed by Avoiding Riot Police. Some went smoother than others. Avoiding Old People was one of favourite lessons, despite my failing grade.

It was around the time I got my license, that Dad did an amazing thing and ponied up the cash for a family car. We’d never owned a car before, but had always relied on Bolivia’s excellent public transport system, which you can read about here. I think we borrowed about 3 different VW beetles over the years as well. This was because we were poor, and in the end I suspect Dad must have done the unthinkable and sold off part of his beard to scientists so they could clone Wooly Mammoths, Jurassic Park-style.  After a couple of exploratory missions, Dad and I went down to the used car lot next to the river to find our diamond in the rough. By car lot, I mean some guys in dark glasses camped out under tarps. Our diamond turned out to be a dusty Toyota Caribe, which was a 4WD wagon that had bumpers like a volvo on botox, and strangely, electric windows and a sunroof. I say strange because Dad was the tightest man I knew. He thought putting milk, sugar or actual coffee in your coffee were additional expenses no one should have to bare. His coffees often tasted remarkably like hot water. Even the heat was optional. I looked at the car and beamed a huge smile at two-face Dad in his half-beard, knowing full well he’d lost all use of his faculties, like what happened to Samson when they cut his hair. No matter, we were finally getting a car, and it had electric windows and a sunroof. Being the cautious type, Dad asked the dealer how many miles were on the clock. “How many miles do you want?” he replied, (true) and with that, our exhaustive research was done. Dad handed over a large wad of US monies and away we flew, hands joyously flung out the windows, the breeze and spring sun flowing in through the open sunroof… for about 100 yards, since used cars in Bolivia don’t come with any fuel. The Toyota was a ‘transformer’ too which isn’t nearly as cool as it sounds. They imported cars from Japan, and then converted them to lefthand drive. Some were well done, others not. Some had gaping holes in front of the passenger where the steering column once lived. IF you were creative, you could put a fishbowl in there. In the Toyota you couldn’t tell it had undergone any surgery, except 5th gear was so far away you nearly dislocated your shoulder anytime you were on the highway.

Turns out the sunroof came in handy, because girls loved standing up in it. This is something that you’d arrested for in Australia, but garnered cheers from the cops in Bolivia. Go figure. Bolivia is all about girls and how many you had. I could fit 2 standing through the sunroof and another 3 in the car, which is plenty by anyone’s standards, unless they’re from Utah. Driving down the main plaza one day I watched a guy behind me checking out chicks as he got closer and closer until he bumped into me. Thankfully I had those giant Fisher Price bumpers, and he was very apologetic. The hatch made a slight squeak after that. Dad never noticed. To his credit, Dad actually let me take the car out quite often, and I drove it to school on days when he was away. It’s possible he was unaware of those days. I think my fastest time to school on the highway was 7 minutes, which will only mean something to all those who have travelled the distance by school bus from Cochabamba to Quillacollo: a grueling 55 minutes in comfort akin to sitting on a sack of rail spikes. We’d only had the car for about 2 days and I remember we visited one of the grade school camps night sessions that was on at the time. I had no interest in seeing all the little kids at camp, and besides, sitting in a new car in the dark by yourself is cool, so I listened to the radio. Obviously, I turned the key to ‘accessory’ and not ‘on’ because only an idiot would do that and it could kill the alternator if you sat there for 2 hours listening to music while the car’s electrical system melted around you. Suffice to say, we barely made it home. We had to push the car through the gate in the middle of the night and Dad was super-overjoyed when he had to buy a new alternator the next day. Getting the car parked in our tiny front yard in the first place was like a game of Tetris. Doing it while the thing was completely dead was a new game entirely. I also backed into a tree once that was in middle of the road. I don’t mean the median strip; I mean, they built the road around it. Not really sure why they left it there, but afterwards the hatch made a slighter louder noise than before and the sometimes wouldn’t shut properly. Dad didn’t notice. I picked my brother up from a friend’s place way up in the foothills of the mountains once, and flew back down on the cobblestone street at about 185 miles an hour. All the rattling didn’t do much for the hatch, which afterwards felt quite loose. Dad didn’t notice.

Months later, when leaving Bolivia for my very successful university career, Dad pulled the bags out of the back of the car and had some trouble with the hatch. “This just doesn’t shut like it used to,” he said, scratching his head.

“Huh,” I shrugged, clearly puzzled. “Have one of the students in the Toyota Wagon Mechanical Repairs elective take a look at it.”